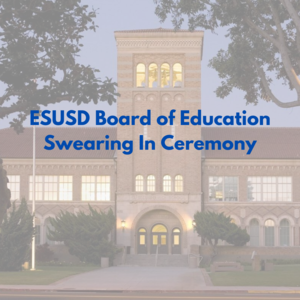 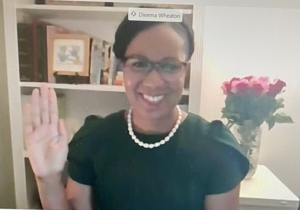 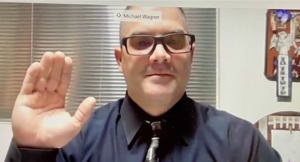 The El Segundo Unified School District held a swearing-in ceremony for its Board of Education (BOE) members on December 14, 2020.

Two of the five BOE seats were up for election during the November 3, 2020 general election. Current Board members Paulette B. Caudill, Emilee M. Layne, and Tracey I. Miller-Zarneke have two more years of service remaining on their four-year terms. With the election of new Board members Michael D. Wagner and Dieema A. Wheaton, the District has all five seats filled on its Board.

As part of its annual organizational meeting on Dec. 14, 2020, the Board of Trustees also elected officers. Tracey Miller-Zarneke was elected president, Emilee Layne was elected vice president, and Paulette Caudill will serve as clerk. ESUSD Superintendent Melissa Moore was appointed secretary.

For a decade prior to her term on the Board of Education, Tracey Miller-Zarneke served our school community in a number of leadership roles including PTA President and School Site Council President (CSS); Program Chair for Character Counts and Grades of Green (CSS); Chairperson for Parents on Campus (ESMS); and Parliamentarian for the El Segundo District PTA Council. She played a key role in bringing Green Ribbon accreditation to CSS; earned PTA Honorary Service Awards at both CSS and ESMS, as well as a Continuing Service Award at CSS; served on the district level Technology Committee; and has held long-standing membership in the Superintendent’s Roundtable through the El Segundo Education Foundation.

Tracey was born in New Jersey but happily relocated to California as a child when her family had enough of the East Coast winter weather. She became a GATE/Honors/AP student in the Garden Grove Unified School District and later attended UCLA where she earned a Bachelor of Arts degree in English/American Studies.

On the professional path, Tracey’s career began in the field of public relations and later shifted into animation production. In the last decade, her role has been balanced between the two realms as a published author of twelve “art of” books in support of various animated films; co-author of the historical Before Ever After: The Lost Lectures of Walt Disney’s Animation Studio; editorial advisor on Directing for Animation; and technical editor on the second and third editions of the textbook Producing Animation.

Tracey is grateful for being a resident of El Segundo since 1997. She and her husband Mike have two sons that are ESUSD students—Joshua (Class of 2022) and Ryan (Class of 2025). Together they enjoy world travel, great meals shared with family and friends, and coaching, participating in and/or cheering on youth sports.

Emilee Layne was born and raised in Poway, California and graduated from Brigham Young University. While at college, she met and married her husband, Scott. They have three children: Wyatt, Jake, and Abigail. After graduating in 2000, Emilee and Scott moved to Scott’s hometown of El Segundo. Here, they both began working for the family construction company, C. C. Layne & Sons Inc., which has been in El Segundo since 1959. In 2010, Emilee started the janitorial company, El Segundo Commercial Pro.

Emilee has served as PTA President, Parliamentarian and was on School Site Council at Center Street School. She was also awarded PTA’s Honorary Service award in 2011.

Emilee is an active member of the Church of Jesus Christ of Latter Day Saints and enjoys serving within her local congregation. She and her family are outdoor enthusiasts who enjoy participating in sports, camping and motorcycle riding.

Serving as a member of the School Board is the next step for Emilee to be able to help preserve and enhance the award-winning school system that is the El Segundo Unified School District.

Paulette was born in Bozeman, Montana, and moved to Manhattan Beach, California, with her parents and younger brother at the age of three. She graduated from Aviation High School and Dominguez Hills University with a degree in history. She earned her Teaching Credential from California State University, Los Angeles.

She has lived in town since 1974, and her son graduated from ESHS. As a parent, she served in PTA, becoming Council VP, and was awarded the Very Special Person Award. She was active in Little League and Boy Scouts. Also, she has been a member of ROAD (Reach Out Against Drugs) since its inception and currently serves as president.

Paulette Caudill spent 20 years at El Segundo High School teaching both Special Education and College Prep History. She has a master’s degree in both Special Education and School Administration. Prior to ESHS, she taught for fourteen years in Downey Unified School District. Over the course of her 34 years of teaching, she taught all grade levels K-12, adult school, and graduate school. She mentored teachers for many years and served as ES Teacher Association President, as History Department Chair, and as Co-Chair of the high school Leadership Team.

Michael Wagner is a dedicated educator and athletic coach with more than 20 years of experience in administration, teaching and coaching at public and private schools. Michael currently works as an Adapted Physical Education Specialist for the students in the Palos Verdes Peninsula Unified School District. He previously held administrative positions including roles as an Assistant Principal/Dean of Students at Animo Locke High School, and as the Principal at Junipero Serra and Saint Matthias high schools.

He is also a dedicated coach having served as the Athletic Director at Saint Monica and Junipero Serra high schools coaching multiple sports during and currently in his career as an educator. Since 2004, Michael has also been part of the local community youth sports, serving El Segundo Little League, El Segundo Youth Football and El Segundo Youth Lacrosse in board, managerial and coaching positions. In 2014, Michael

began serving as an assistant football coach at the high school and continues to be a part of the youth coaching community in El Segundo.

Michael is husband to Sylvia, father of four, and 25-year resident of El Segundo who enjoys being active in the community. He plans to bring a student-first approach to his role on the Board of Education and is committed to continuing the tradition of success the ESUSD Board has established for the community.

Prior to being elected to the Board of Education, Dieema Wheaton served our school community in various leadership roles including PTA Treasurer at both Center Street Elementary School and El Segundo Middle School. She was awarded the El Segundo PTA Honorary Service Award in 2016 for revamping the PTA’s financial process. She is currently a PTA member at all four main school sites and is a proud Superintendent’s Round Table contributor.

Dieema earned a bachelor’s degree in economics/accounting from Tougaloo College in Mississippi and was licensed by the State of California as a Certified Public Accountant in 2000.

With more than 20 years of professional experience, Dieema began her career with the global accounting firm KPMG in Los Angeles. She later worked as senior management in the finance departments of Universal Music and Sony Pictures Entertainment. Currently, she is Chief of Staff for Palm Tree LLC, an M&A consulting and advisory firm in El Segundo. She works to develop, implement, and oversee Palm Tree’s internal finance processes and procedures and manages Palm Tree’s human capital, and internal operational initiatives.

Actively involved in the schools since 2011, Dieema moved to El Segundo with her husband, Andrew, and three children in 2014. She is an active volunteer both for the schools and in the community. Dieema and her daughters volunteer for the National Charity League where she has held the positions of Vice President of Communications and Grade Level Advisor. Dieema is proud to serve on the ESUSD Board where she will work to achieve continued excellence at our schools through compassion, empathy, and dedication.